The project is located on Rue Denis Mallet in the commune of Bègles. It forms a part of the new eco-neighbourhood Terre Sud, located in the south-west of Bègles, near the neighbouring commune of Villenave d’Ornon. The urban strategy consists of laying out the buildings in such a way that the majority of the housing units have a double orientation. The residences offer interesting views onto the park and encourage connections between residents.  Footpaths weave across the site and connect to a multi-storey residential parking garage. In total, the development will include 1,200 new housing units on 26 hectares (64 acres) of land. The remaining 30 hectares (74 acres) are dedicated to green space, playgrounds, and other amenities.

Situated on the eastern edge of the eco-neighbourhood, the project site borders a large green space composed of ancient drainage channels and riparian woodland; it marks the entry of the eco-neighbourhood via the pedestrian paths leading from the neighbouring Parc de Mussonville. The surrounding urban blocks are composed of apartment buildings, each one with a strong identity rooted in the landscaped environment of the site. A black-and-white theme governs the project area and these colours are required to be used for the façade of each building. An objective of the project is to preserve the botanical heritage of the site and a majority of the drainage channels necessary for the vegetation to survive.

The buildings are laid out following four key criteria:
1-    Align the buildings with the rear lot line and with Rue D. Mallet
2-    Preserve the trees in the centre of the block
3-    Split the building massing to create views through to the park
4-    Maximize sunshine

These criteria led to the establishment of an S-shaped layout, preserving an open centre block while creating the necessary street alignments. The project is divided into three buildings connected by vertical circulation cores that offer views out to the surrounding environment. The first two buildings are six floors high while the third, closest to the Park de Mussonville, reaches eight floors and appears like a prow within the overall composition. The two upper floors of this building are occupied by duplexes with double-height terraces that form large windows onto the park.

The urban plan of the eco-neighbourhood is based on a system of open blocks, whose boundaries are marked not by fences but by simple changes in material between the public and private domains. The site development strategy consists of organizing the outdoor spaces into two types of ambiance:
South façade: Along the “urban” façade, the building fronts the street, with an inflection marking the two building entrances. This front of the lot is planted with garden-type vegetation, in harmony with the recently completed projects nearby, as well as a grove of trees that connects visually to the centre block and the Park de Mussonville.
North façade and centre block: Development on the centre block was limited so as to maintain its natural wooded character. The existing tree cover has been enhanced and densified by the planting of new trees of similar nature. A variety of natural-shaped hedges and shrubs are planted around the base of each building, softening the transition to the natural area of the centre block.

The building façades are clad in flat “Rully” tiles, either black or white in colour. By playing with two types of finish, glazed and matte, we turned the entirety of the building envelope into a composition based on a photograph of the surrounding vegetation. We worked with a pixelated black and white photograph, scaled to match the façade, in order to determine the position of each glazed and matte tile. The façade acts as a photographic negative of the surrounding landscape environment. The overlap between one row of tile and the next creates a slight inclination so that they reflect the sky. Each façade thus contains an effervescent image of the site.

Due to the site being in a flood zone, the buildings are raised on pilotis. The ground level, which must be permeable to floodwater, is used primarily for parking. The parking area is clad in perforated metal screens, powder-coated white, that visually integrate it with the residential building while permitting the passage of floodwaters if necessary. Similar screens are used to secure the building entrances by delimiting a patio at the point of access to each lobby. The lobbies are tucked in the clefts between buildings, along with the vertical circulation. The walls of the vertical circulation areas are clad in glazed white tiles, contrasting with the exterior envelope and giving the impression that parts of the building have been carved out. The white colour, and the gloss of the tiles, bathes the staircases in light and encourages their use. The stairs and walkways are made of light-coloured concrete, with white powder-coated steel bar railings. The buildings are pierced with openings at regular intervals, calibrated to the dimension of the tiles. Some of these are large window openings corresponding to the living rooms, while others are voids containing the loggias of the apartments. The pierced openings are emphasized by means of a reveal clad in white metal. Similarly, each loggia is painted entirely in white. Particular attention is paid to the steel bar railings. They consist of flat metal balusters, powder-coated white. This detail creates the necessary intimacy for the loggias while increasing the brightness of the living spaces. 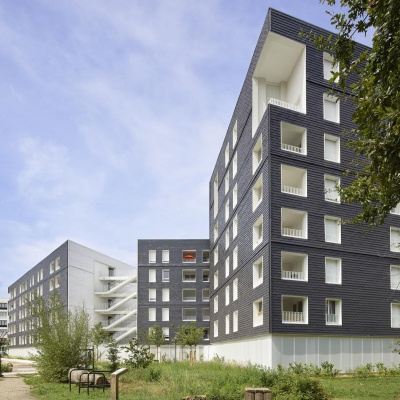 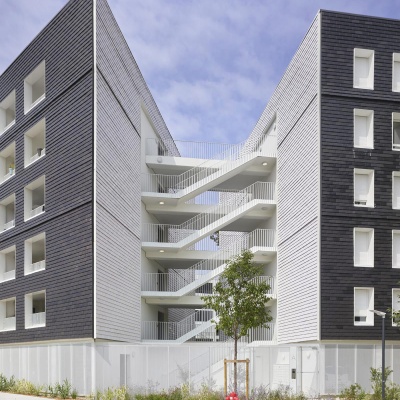 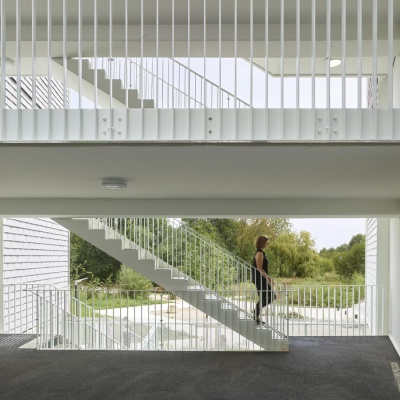 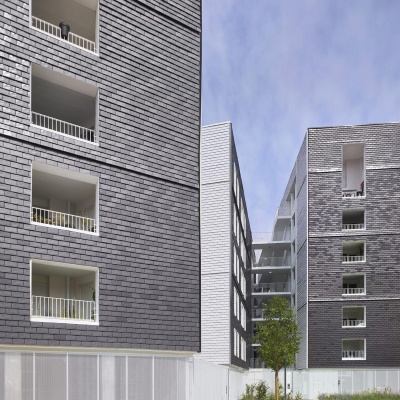 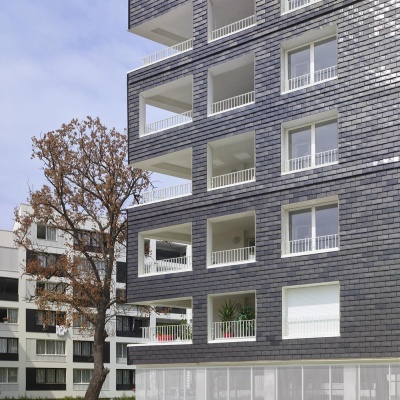 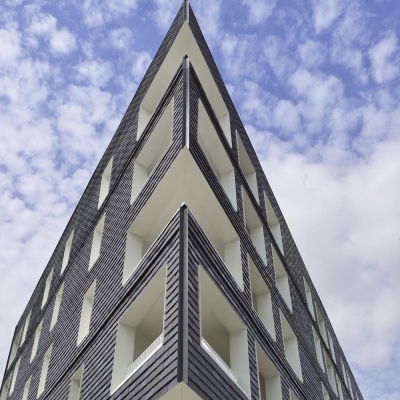 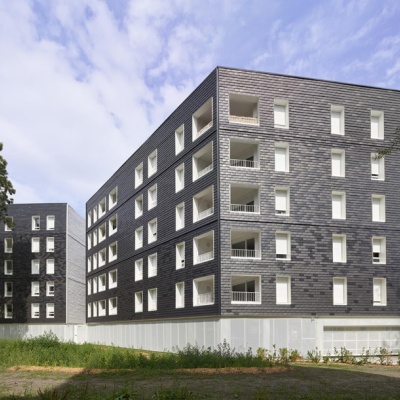 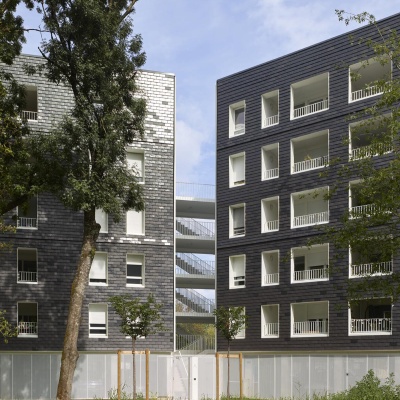 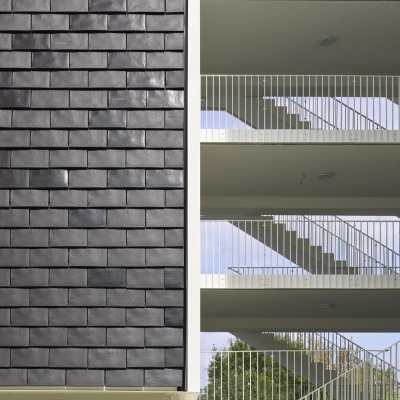 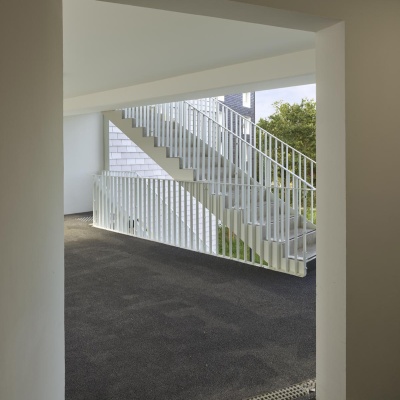 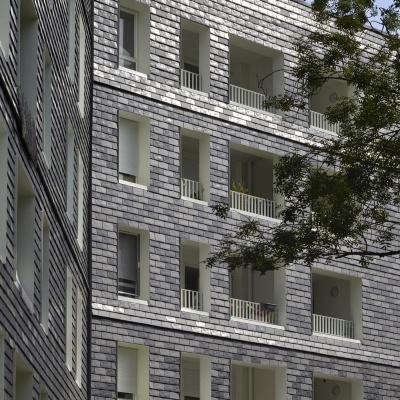 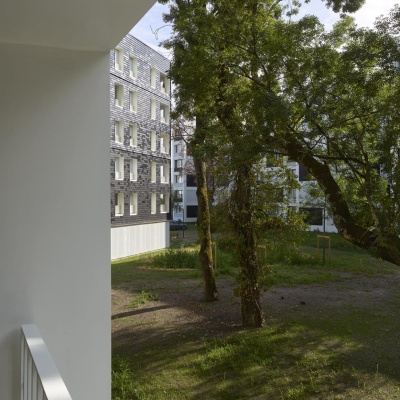 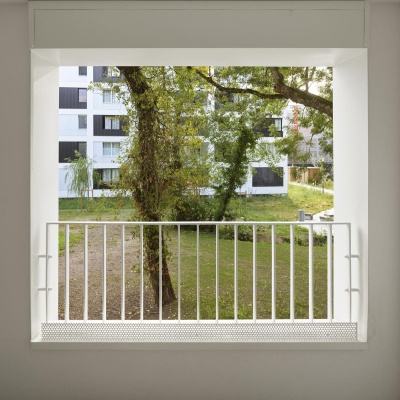 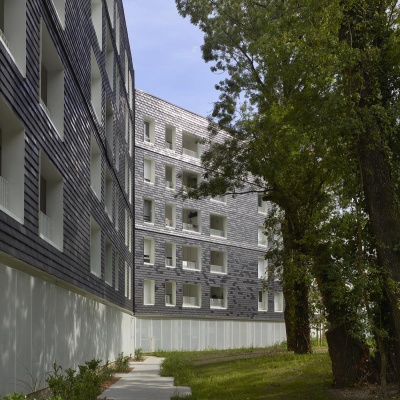 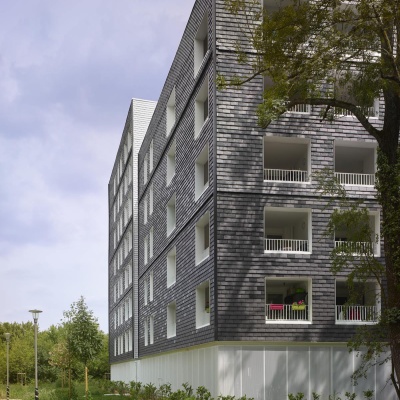 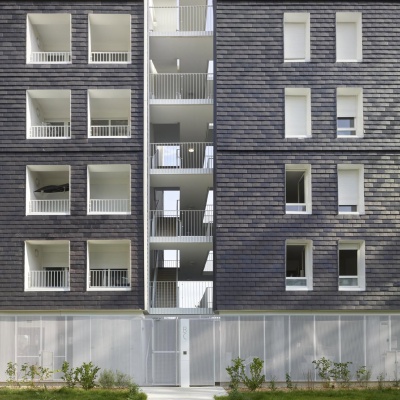 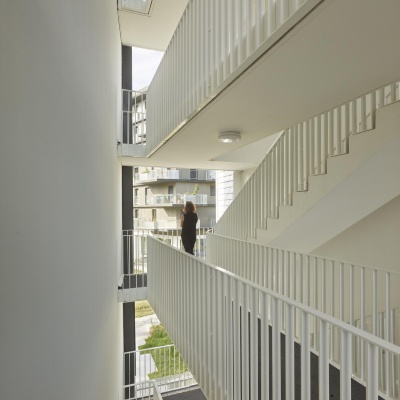 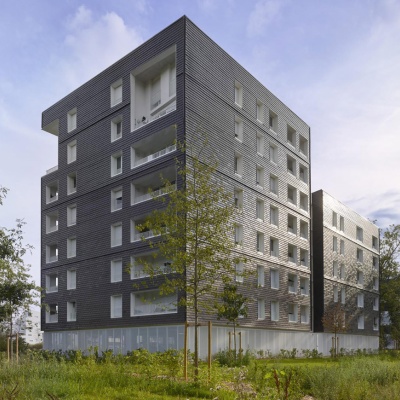 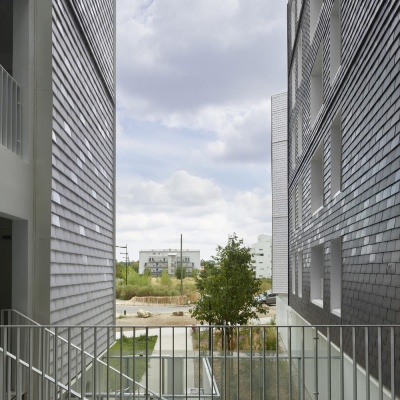 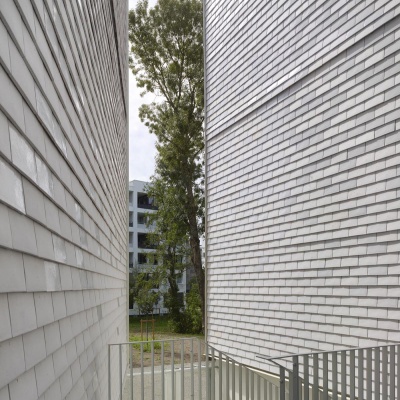 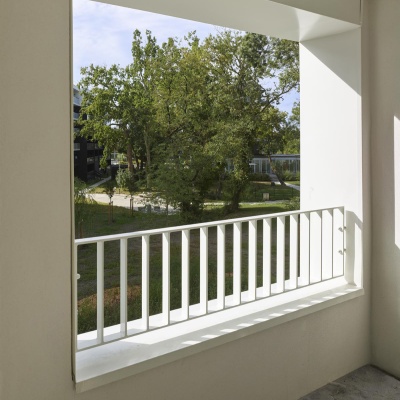 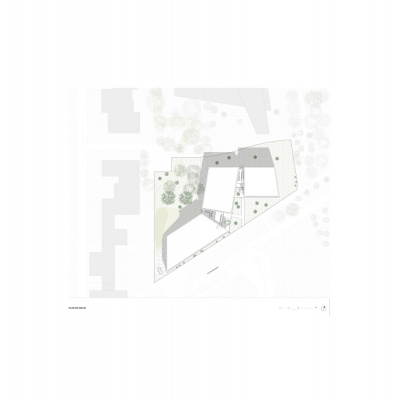 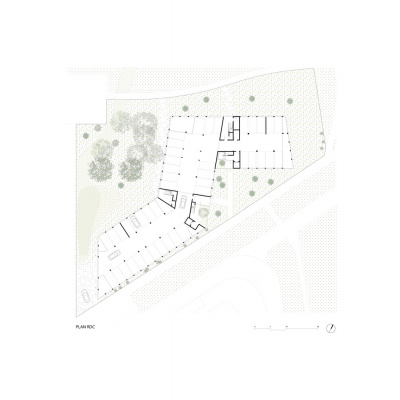 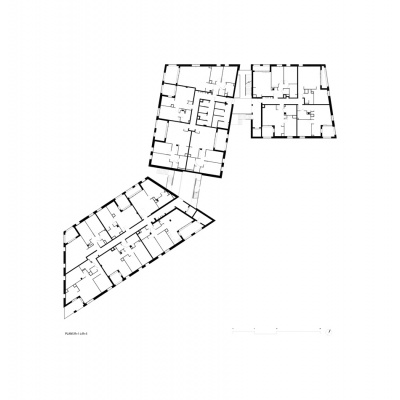 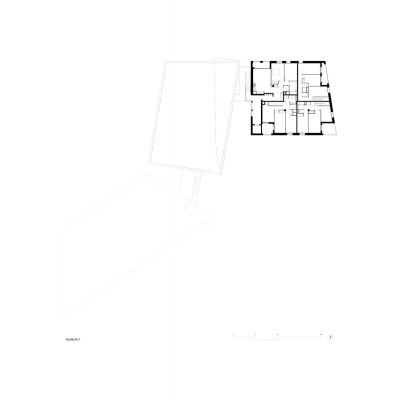 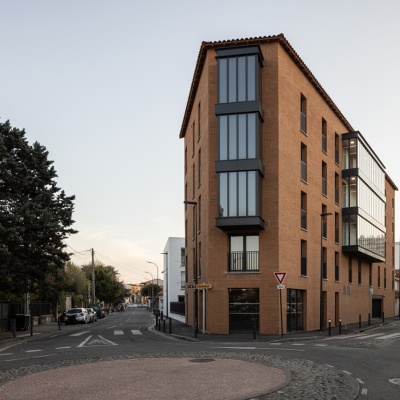 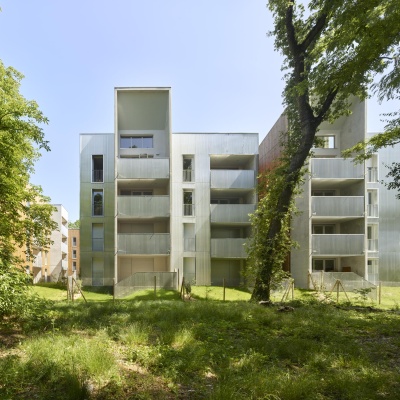 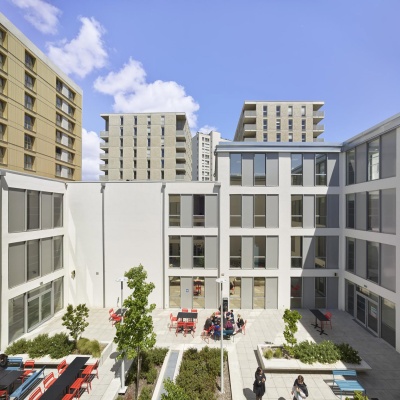 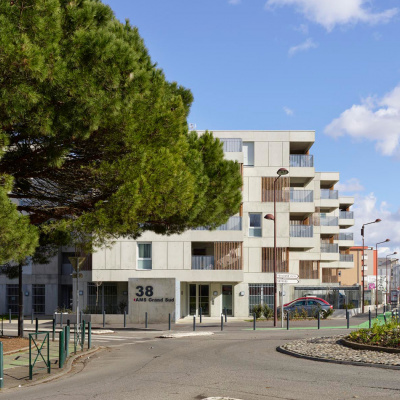